«Jamii ya sinema.club» is a platform for discussion and collective research devoted to film cultures and the arts of the moving image, which aims to contribute to debates on past, present and future developments in these expanded practices from a tropical position. The platform has grown out of discussions and meetings at Ateliers Picha and opened to the public during the 2022 Lubumbashi Biennale in the form of a film society, a trans-local, hybrid ciné-club. Following Pan-African paths that show how film clubs can contribute, post-independence, to the emergence of rich film cultures on the continent, the project offers the opportunity to reflect on their past and future functions (places of “technocratic paternalism” marked by coloniality, later appropriated for resistance, liberation and self-determination); on the creation of autonomous forms of production and the development of alternative networks for the circulation of films; and on the relocation of film away from its historical commercial or institutional setting (cinemas) up to its contemporary migrations into the field of the arts. By making the film society an object of artistic speculation and experimentation, the project aims to reinvent this form and put into practice its potentialities as an assembly; as a situation where people are able to study and think freely; as a joyful celebration.

In December 2021 Iorio/Cuomo, together with the artistic director of Atelier Picha and curator of 7th Lubumbashi Biennale, Lucrezia Cippitelli, initiated a collective process of site-specific research in Lubumbashi focusing on cinematic culture in the DRC with a continental perspective and a conscious approach to issues related to colonial history and postcolonial cultural legacies. The research was conducted together with the young artists and practitioners selected by Picha as participants in the Ateliers Picha programme, who played an active role in the conception and programmation of the project. «Jamii ya sinema.club» was collectively named using a mix of Swahili, French, English and street slang to locate this informal space of contact and connection (jamii means society, but also extended family). The project is therefore the result of many months of screenings, discussions, talks and workshops led by Iorio/Cuomo and developed in a site-specific version by and for a little but growing community of film lovers in Lubumbashi and the DRC.

Between January and August 2022, Iorio/Cuomo (working remotely from Switzerland) and a small group of Congolese writers, artists and filmmakers interested in the practices of moving images organized a monthly series of meetings around a film/video. Each viewing comprised presentations, lectures by invited experts, as well as discussions and debates. These meetings gradually extended beyond the circle of Ateliers Picha and were followed by a wider audience on site in Lubumbashi and online in Kinshasa, Ghana, and between the African and European continents, forming an informal network of exchanges and reflections around past, present and future practices of moving images.

Through this process the concept for the project formalised. The informal film club (organized both on site at Picha and online) initially developed as a platform to test and experiment, according to the multiple interests of the participants. Given the quality of the exchanges and the unprecedented, trans-local and hybrid nature of its format, the success of the research established the practical and theoretical foundations for the future of the project. Focusing on film clubs as an object of research led to the tracing of fragmentary and ambivalent stories of film clubs (locally in Congo and in other contexts, specifically in Tunisia and Egypt), highlighting the significant contribution these played in the emergence of a rich film culture on the continent after independence. This process provided an opportunity to reflect on the past and future functions of film clubs and the development of alternative forms of production and networks for the circulation of films. Taking the form of an active film club, the project considers new angles on the potentialities of this format as an assembly, as an opportunity for study, as a space of resistance, as a joyful celebration; finally, as a transformative act.

The project is conceived as an artistic process with various outputs including an online platform, public programme of screenings and workshops, two installations during the biennale and ongoing research that structures the development of the project. Since July 2022 these activities and outputs have been in development by a working group composed of artists, filmmakers and writers Jackson Bukasa, Melissa Jina, Jackson Ngeleka, Bibatanko Tankama and Iorio/Cuomo. The Swiss artist duo have been on site in Lubumbashi since August.

In September 2022 the working group organised three workshops with a small group of selected participants at Atelier Picha in Lubumbashi. Moderated by Iorio/Cuomo and the working group, the workshops used films (from the public programme) as a lens to deepen theoretical and practical aspects. The workshops included a viewing, presentation by a guest expert followed by discussion and reflection. The sessions then continued with a practical experiment to create a visual, textual or filmic production made collectively. The themes for the workshops were as follows: “Film societies/film as workshop”, which explored the stories of film clubs on the African continent that largely remain fragmentary and forgotten. The workshop proposed to open a pan-African perspective and archive that would inform the activities of «Jamii ya sinema.club». “Toxic Cinema”, which focused on cinema reception practices in Lubumbashi and explored the subversive imagination of urban subcultures and contexts. “In/Visible films”, which raised the question of the possibility of independent film production outside the professional industry by looking at several historical and contemporary cases.

During the biennale from October to November 2022 in Lubumbashi, two installations will be installed in the projection room in the Atelier Picha building and in the main exhibition at the National Museum of Lubumbashi. The interventions will showcase para-filmic materials and media (posters, flyers, membership cards etc.) that materialise the existence of the film club, and photos and videos documenting the project process.

An online platform will play an essential role for the hybrid and trans-local operation of the film club, which intends to meet the needs of the local context as well as give global access to the activities of the film club. In addition to broadcasting the public screenings, the platform will serve as a comprehensive repository and archive for the research and material generated through the course of the project.

The public film screening programme with accompanying presentations, discussions and debates will take place between 8 October and 5 November 2022 in the projection room at Picha and beyond, according to specific themes of the film and the context of presentation.

The film programme proposed in the framework of «Jamii ya sinema.club» is faithful to the principle of the film club as an alternative distribution platform for rare films/works that have never been presented in the local context. The selection focuses primarily on films that show cinema in situation, introducing a reflexive dimension that exposes the modes of production or emergence of films and highlights the issues of the reception of cinema by its audience. The programme creates paths and encounters: it returns to the historical constitution of pan-African networks for the circulation of films, which have linked the north and south of the continent, and to their promise of multiplying screens of abundance that can serve a cinema of liberation. The programme takes up this pan-African horizon and opens up to films from North Africa. It looks beyond the dominant cinemas in the local context (Hollywood cinema, French-speaking West African cinema produced by Northern countries) to make visible other transnational connections, focusing on diaspora productions, Black African American cinema, contemporary artists’ films and digital cultures, “cinemas of the North”, and the cultures of “minor cinemas” – amateur, feminist, decolonial. The programme links historical films with contemporary productions, works from different international contexts and on the African continent with productions by local filmmakers and artists. It is based on films that have marked the emergence of African cinema in order to better (re)discover a cinema forgotten by the canonical history of cinema or left in its margins.

The activities of the film club will continue in Lubumbashi after the biennale with regular screenings and discussions organised by the working group from November to June 2023. Looking ahead, the project will constitute a corpus of artistic work and research as well as a curatorial programme that can be presented in different formats by international institutions. A publication reflecting the entire project is being developed simultaneously and will consist of all the editorial content generated as well as the visual productions developed during the workshops, and documentation of the different phases of the project. 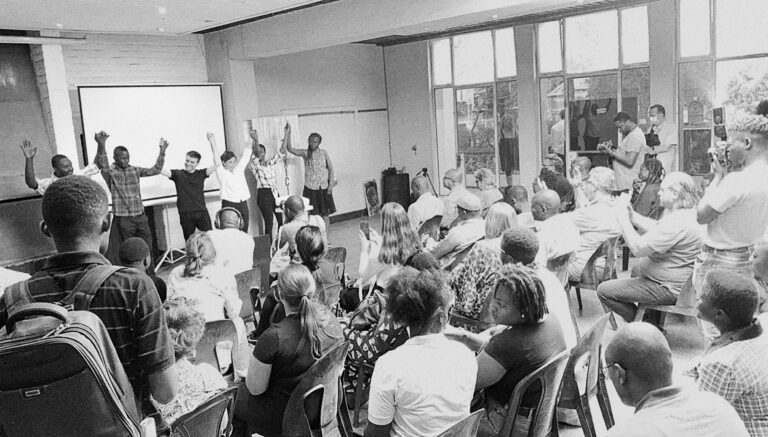 Maria Iorio and Raphaël Cuomo are two artists and filmmakers. Favouring a collaborative praxis and long-term research, their recent projects engage with past and present global mobilities and unfold the entangled histories shaped by those movements of life, (post)colonial encounters, migrating forms and sounds. Investigating the conditions under which hegemonic historical narratives are produced and can be challenged, their films manifest unheard voices, diasporic experiences, resistant subjectivities.