“I first met my big brother, my mentor, VUKAZITHATHE, eight years ago. I was impressed by his skill, his wisdom. And immediately we got together and we made music.” – Nthato Mokgata

Vukazithathe hails from Dweshula, a rural village in KwaZulu-Natal. Despite a considerable talent, revealed after he learnt to play his father’s guitar in secret at the age of nine, Vukazithathe had never found the exposure those around him knew he deserved. Nthato Mokgata is a Standard Bank Young Artist award winner, and the founder of acclaimed musical projects including Sweat.X, Batuk, and the documentary Future Sounds of Mzansi.

The pair, one exploring the boundaries of alternative hip-hop, the other representing the traditional genre of maskandi, had previously formed a band, Fantasma, and collaborated on Spoek Mathambo’s album, Mzansi Beat Code. Their work together shows the creative potential of a dialogue between two Nguni artists of two different generations, cultures and musical traditions.

In 2017, with the support of an ANT Mobility grant, Nthato coordinated, promoted and documented a series of live shows and collaborations between Vukazithathe and other musicians, promoters and recording engineers – the Maskandi Marrabenta Tour.

The tour initially aimed primarily to support a collaboration between Vukazithathe and percussionist and drummer Texito Langa from Maputo, Mozambique. The tour would involve performances at the Azgo Festival in Maputo and MTN Bushfire Festival in Eswatini and a busking tour in KwaZulu-Natal.

“Maskandi is a type of music … It’s Zulu music. It’s played and performed in the isiZulu language. I won’t say strictly that it’s “the music of Zulu people” … Of course, I could also put it like that. It’s the music of people who love to perform Zulu culture.” – Vukazithathe

The project aspired to create a sustainable bridge and dialogue between Mozambican and South African culture through creating a fusion between two strains of unique music styles which are ubiquitous in the respective countries. Due to the proximity of the two countries and resident populations, culture has always been exchanged quite fluidly, through migration, migrant labour systems as well as sharing in language and music. The main cultural exchange happening currently is in the space of modern/contemporary music, and there are very few avenues for these two older styles to connect and explore their shared origins, with the possibility to create something new.

A moment where a woman street merchant called out his name, as we walked passed her after the Umzinto busking show, referring to him as “the preacher”, left a mark. We realized that we need to tell a story which goes beyond the portraying of his musical skills, and present the social and personal context of the story. – Nthato Mokgata

The tour, and a journey to Vukazithathe’s home village, were recorded and the footage used to create the documentary film VUKAZITHATHE, which was released in 2020 and included in the National Arts Festival programme. The film tells Vukazithathe’s story and pays homage to the maskandi genre.

As Nthato explains: “The route of the tour took us on a journey through Vukazithathe’s compelling and fascinating personal life story. Simultaneously, we also learned a lot about the historic and social context of his life events, from his experiences as a child of a mine worker in Dweshula in the 70s, through the background and his role in the civil war which took place in the area during his young adultery in the 80s, and finally his decision to use music as his only weapon which resulted in him leaving the area and starting a new life in the urban landscape of Durban in the 90s onwards and the hardships that followed.”

The experience of documenting the tour and Vukazithathe’s story led to significant developments in the team’s administrative and technical skills – especially given the need to shoot in uncontrolled environments. Although having previously written and directed film projects in the past, this was the first project that Nthato Mokgata fully acted as director of photography.

What holds a lot of talented musicians back is a lack of access to education, resources and information. Vukazithathe had never before used the internet – a lack of access that is in some ways generational, in some the result of his poverty growing up.

Itamar Weiss, the recording artist manager and recording engineer with whom Vukazithathe and ​ Nthato collaborated on the tour, explains how the tour was crafted in such a way that it would provide a foundation for the maskandi musician’s future career. “Leading up to this project we were faced with the question of how do we utilize our resources in a way that would be most beneficial for the sustainability of Vukazithathe career going forward. All independent musicians are facing similar challenges, and this is especially true when it comes to musicians that are far from the main veins of SA’s media and business hubs. Too often a supported tour allows a musician to make income on a specific occasion, which does not sustain further. We feel as we were able to capitalize on the opportunity to utilize Pro Helvetia’s support by creating a huge pool of material for Vukazithathe to draw from going forward, both as original content and for promotional purposes in a short period of time.” Weiss continues to provide support to Vukazithathe’s career.

“The lasting impact of the Maskandi Marrabenta Tour for mine and Vukazithathe’s work has been immense, in that it helped to officially launch his career in the wider public. It was Vukazithathe’s first tour ever as a solo artist, and it generated enough content, energy and inspiration to launch subsequent local and international tours.” – Nthato Mokgata

At the age of 55, Vukazithathe realised his dream of performing a solo tour for the first time. Exposing his rare talent to a wide local and international audience brought with it many more opportunities (Vukazithathe was later invited to Swaziland, France, and Reunion Island). The documentary that was filmed during the tour subsequently raised enough funds to help Vukazithathe survive during the worst parts of the initial Covid-19 lockdown. 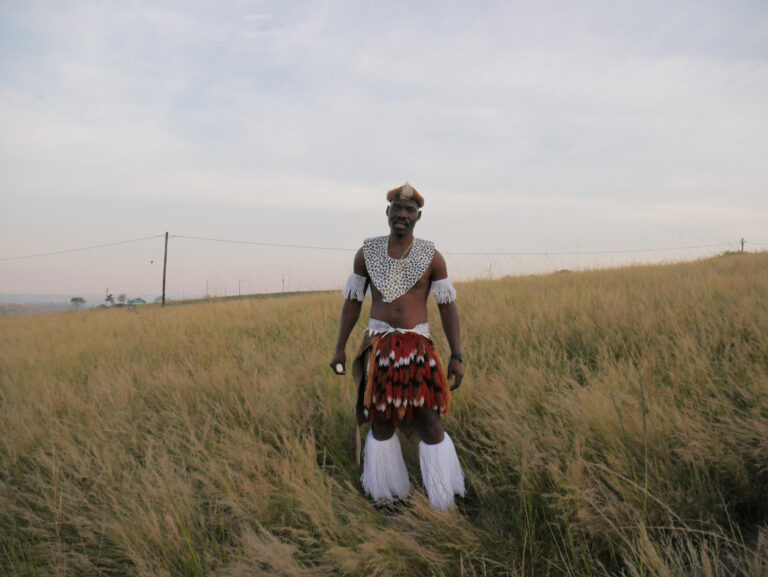