Georgia Munnik is visual artist from Johannesburg. She graduated with an MFA from Tromsø Academy of Contemporary Art, Norway in 2015. Her work is research-orientated and is concerned with performing broken moments in official languages.

From April to June 2019, Georgia was an artist in residence at Atelier Mondial in Basel, Switzerland.

Here, Georgia shares an excerpt of text with accompanying digital media reflecting on her research and work during her studio residency.

in preparation of a language without an itinerary[1]

I arrived at Basel in the beginning of April with my project The only language I speak is not my own – a collaborative workshop initiative on the refusal to write down a language. The project involves working with specific diaglossic communities, who code-switch, to collectively invent and perform an orthography for a coded language. This mirrors the practice of code-switching as an untranslatable act. The project is concerned with the potential for subverting public street signage into an orthography for colloquially-spoken, officially un-transcribed, coded languages. I used my time in Basel to work with public signage as orthography. This led me to look more critically at the relationship between language and the not-spoken, ideological discourse of public signage in a Swiss-German urban setting.

Late April, over dinner one evening, a visiting artist from South Africa, whose work deals with violence against women and lgbtqi+ people, tried to describe ‘signs’ for delineated areas for sex workers to operate within, that she had encountered on her walk home to her hotel. She could not find the word for the thing she was trying to name: a plaque . . . a graffiti . . . a temporary notice . . . a label? I tried to help her find it but, the thing that she was referring to does not have a name that comes to mind readily – it is not really something that can be named directly.

What she was describing were green dotted lines, stencilled onto short sections of pavement, concluded by a white and green stencilled pictogram of a stick figure in a skirt with large breasts, leaning against a street lamp. These stencils demarcate the beginning, or end, of labour in an area in Klein Basel, as determined by the Canton of Basel or rather, the collective vote of the community of Klein Basel.

In contrast to the pictogram on the pavement, warmly-dressed women stood on the precipice, arms folded, open for business.

I think the reason we could not immediately think of a name for the signs is because they appeared to not be permanent, nor even official. Crude cartoon depictions of a real life business transaction made me think of someone describing the scent of a field of meadowsweet from having seen it in a photograph, only. Or, a live translation of a foreign language film by someone who does not speak that language. Allegedly, the dotted lines are meant to signify a kind of porous border, which sex workers can move between, depending on whether they are soliciting sex or not.[2] What does soliciting sex look like, however, and when does the state intervene and, how? Normally, I would assume to see policemen/ state officials on the scene: the voice of the law that calls us into participants. In my experience of Basel, however, the signs are enough. As I cycled by, I would unconsciously glance at the people hanging around these sections of pavement to see if they had stepped over the dotted lines or not. Whatever ways I may reflect on that – as an innocent curiosity/ gross fascination/ not relevant – I had in this moment become inaugurated as a third party to this interaction: my job was simply to witness and, in witnessing, I became the law. Maybe this was the reason we could not think of a name by which to call the signs: the signs had called us first, before we could position ourselves, we were already also named in the transaction: witnesses. 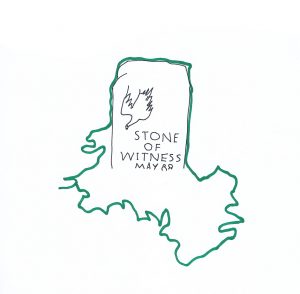 In the first two months in Basel, I documented all the public signs that interested me. I approached my task as if I were listening to two people have a conversation in a language I did not understand, at the point where words are bodies and not words – I wanted to grasp the signs’ opacity to me before I became inaugurated. In my practice, I work with a process called islanding, which is the attempt to isolate the vocabulary of a formally-spoken language from given signifiers, in order to free up its words for new modes of linguistic cognisance. Islanding is a process of counter-translation: repetition, alienation, abstraction, denial and blind optimism. I approached public signage in Basel as the officially written form of Swiss-German, therefore I wanted to work with a mainly Basel-resident public in this process, so that we could make an island together.

I redrew images of public signs and I reduced the scenes to one part: a construction site became an orange cone, the sex worker pictogram was a dotted green line. I wanted to retranslate the signs into something, which did not immediately refer back to themselves: repetition, alienation, abstraction, denial, blind optimism. Then, I turned these images into laminated ‘playing cards’ for a silent, multiple choice survey performance between myself and my participants. 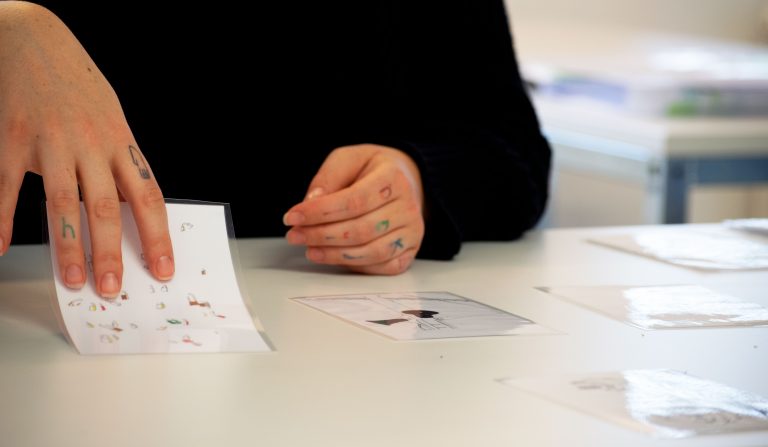 [1] For him, there are only target languages [langues d’arrivee] , if you will, the remark­able experience being, however, that these languages just cannot manage to reach themselves because they no longer know where they are coming from, what they are speaking from and what the sense of their journey is. Languages without an itinerary and, above all, without any superhighway of goodness knows what information. Jacques Derrida, Monolingualism of the Other, p 62.

[2] A colleague asked our Swiss admin to send an e-mail enquiring about the research and development phase for the sex worker areas, and the response was given direct from the head of the governmental department responsible:

“I made the sketch for the pictogram myself, after we discussed different representations (Google image search) in a working group. The representation should be internationally understandable: Recruiting on the street for prostitution allowed here. The green colour should clarify what is ‘allowed’. We deliberately did not want to signal a ban. A graphic artist then created the pictogram on the basis of the sketch.The feedback of the prostitutes confirms that the pictogram is unmistakable. The dotted line marks where the zone begins or ends. It is dashed to indicate permeability. Nobody is ‘locked up’. Prostitutes may also move outside the zone. There, however, recruiting on the street is no longer permitted.”