Manthe Ribane from Johannesburg and Kami Awori (composed of Karami and Awori) from Geneva, will collaborate in the context of CROSSROADS, a platform for discussion with a conference and a cultural programme, organised by The Swiss Arts Council Pro Helvetia and the Swiss Agency for Development and Cooperation (SDC), in Geneva and Basel in February 2018.

This collaboration is an initiative of SHAP SHAP to gather these three talented  artists to explore and share their politics, identities and creative ideas in both contexts of South Africa and Switzerland.

Ribane and Kami Awori will be presented at Festival Antigel as part of the CUSS’ line up SOUTH AFRICA, WHAT’S UP? including FAKA, Dirty Paraffin, DJ Prie Nkosazana and DJ Lag, following residencies in both contexts [Johannesburg and Geneva], this coming January.

About Manthe Ribane
Manthe is a Soweto-born graphic designer, dancer and performer. She works as a graphic designer at 113 Studios which is co-owned by her siblings, they are experts in conceptual set design as well as film and music.

Manthe made her vocal debut with musician Okzharp in the extended play production titled ‘Dear Ribane’ which was directed by Chris Saunders. This extended play was presented at the Norient Music Film Festival in Bern Switzerland. She has an impressive list of collaborations from posing for renowned photographer Akinbode Akinbiyi, appearing in a South African tourism campaign and dancing on tour with Die Antwoord, the notorious rap-rave band that went global in 2010. 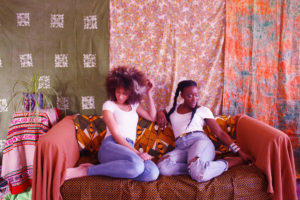 Galvanised by the reception of their debut EP ESQUISSES, the duo embarked on a European tour with “Ca$h, Diamond Rings” singer DENA. Upon their return, they produced #THROWBACK, a compilation of laid–back remixes with a contemporary vibe.The globetrotting duo also recorded their third EP, CARAMELBROWN Y VIA LIBRE, in Havana with the Cuban collective Via Libre.