The Grahamstown National Arts Festival (NAF) kicks off on 29 June and we are a proud to be supporting or associated with a rich collection of productions and projects this year.

We have rounded them up here so you don’t miss out. You can purchase tickets via the National Arts Festival website. 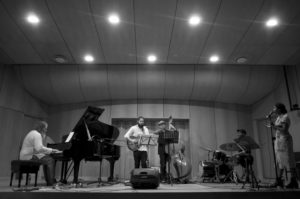 Their performance at NAF is part of a SADC tour that starts this July in Mauritius, and which also features Keenan Ahrends on guitar. For more details of the tour go here. 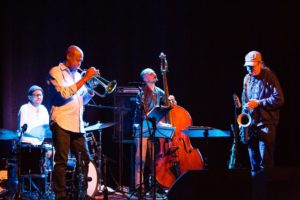 After their two releases, “Untitled Yet” and “FUFU TRYOUT”, the collective Plurism led by  drummer Dominic Egli, presents its third album”More Fufu!”, at the festival. More Fufu is a colourful declaration of love to the African continent, its dishes and its dazzling music, with renowned trumpeter Feya Faku adding his echo of traditional African music to drummer Dominic Egli’s contemporary Swiss jazz rhythm section. The result is raw sensuality, explosive coolness and earthy playfulness, which create song-like melodies, complex and driving grooves and eruptive solos. Fufu – the shared staple food of many West African countries – hints at the shared musical experience of these profound musicians, described in the Swiss jazz magazine, Jazz ’n’ More as “dazzlingly beautiful, four musicians grooving, in perfect harmony with each other.”

Their presence in Grahamstown forms part of a larger tour including dates in Johannesburg, Bloemfontein and Cape Town.  For more information about the full tour go here.

Shane Cooper was selected on bass for the Standard Bank National Schools’ Band in 2003 and ten years later was the Standard Bank Young Artist, showing the speed and diversity of his musical progress. He joins fellow SBYA winner Bokani Dyer and Swiss Saxophonist Christoph Irniger in a unique collaboration, sharing their compositions and ideas in this once-off performance. Each of them is involved in highly innovative projects within the contemporary jazz idiom and they will be exploring song forms that allow for deep improvisational journeys, with a modern groove sensibility as the bedrock, while freely drawing from genres outside of traditional jazz.

Michael Pipoquinha first electrified the internet with his home-made bass videos in 2009, when he was only 13! His technical prowess and natural lyricism left older musicians gobsmacked and in the interleading years his abilities have been rapidly enhanced with impossible-sounding bass lines borrowed from bass and guitar, ferocious grooves and impressive melodic and harmonic knowledge, all threaded through with his eclectic Brazilian heritage. Despite being only 21, Pipoquinha is clearly poised to make his mark on the world and has wowed audiences in Europe and South America. 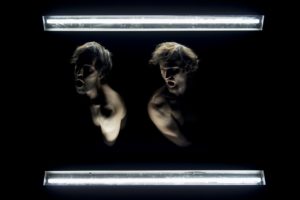 Founded in 1986, the Philippe Saire Company has created some thirty shows, with more than 1,000 performances in 200 cities across Europe, Africa, Asia, the Middle East and America. Two pieces, NEONS and Vacuum, feature in a special double billing for this year’s festival, and form part of a tour which includes dates in Johannesburg and Maputo.

NEONS tells the story of two men about whom we know nothing, but who are going through a difficult time in their relationship. The action is refined, intense and at times, full of contained violence. Vacuum generates impossible images and fantastic paintings, an interplay of bodies appearing and disappearing between black holes and dazzling lights.

Touched by the unthinkable acts of Xenophobia happening in this country, these artists have reached out to each other with the intention of breaking the borders between their countries, to connect and look at the future together. The work starts with the question, “Who am I as an African person?”
Breaking Borders was created in the context of a Pro Helvetia/SDC supported residency in 2016 at the Dance Space, Johannesburg, and is a collaboration between Unmute Dance Company (Cape Town) and Tumbuka Dance Company (Harare).

Arterial Network South Africa brings together representatives from Creative Industries and National Events Agency (Seychelles), Shoko Festival (Zimbabwe), and MTN Bushfire (Swaziland) to be hosted at the 2017 National Arts Festival (Think!Fest), with the aim to explore possibilities for collaboration and knowledge exchange with South African counterparts.